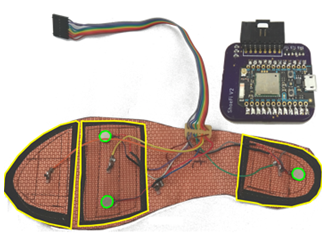 DeepSole instrumented footwear is a quantitative gait training and/or analysis system. It is a modular system which includes the footwear, sensory and tactile feedback  mounted on different areas of the foot. It connects wireless to a remote computer. The sensors on the shoe permit the extraction of gait kinematics in real-time and provide feedback to the foot. The collected data can be stored for later reduction and analysis.

The characterization of gait has traditionally been confined to gait laboratories with typically high operational costs. This limits clinicians and patients to specific settings when characterizing gait.

The instrumented system was validated against reference systems with healthy subjects. Multiple versions of the instrumented footwear were shown to perform well enough to potentially be used in out-of-lab gait analysis.

Subjects with Parkinson's disease may have trouble with ambulation and may require external feedback to improve their gait. The version of the instrumented footwear with vibratory feedback was developed to provide vibratory feedback. This device can modulate both frequency and amplitude of feedback for the wearer and is fully mobile. Pressure and tactor status data are transmitted wirelessly and can be controlled by a remote computer.

Gait Training/Characterization
Back to Top